I've been wanting to learn functional JavaScript for a while. I've stocked up on some books, we've released some great JavaScript courses at Code School, we have a team account at Front-end Masters, and I grabbed Wes Bos' React for Beginners. Basically, I have all the things.

What I've been missing was the right motivation. Of course being better at it will help some of tasks on our .com, but the impact I'd have is minimal so it hasn't felt pressing. I tried psyching myself up with a 30-day challenge but I'm not one of those folks. I think I made it about 4 days before I went on a random trip and lost momentum. Again, there wasn't a true goal. I'm a firm believer in Chris Coyier's reasoning on when and what to learn: Just Build Websites.

Inspiration, Courtesy of a Buzzword

Progressive web apps are so hot right now. I was curious, so I dove into some posts and Jake Archibald's talk. I love the ideas behind them and want to take a crack at building one. Somewhere in the mix I ended up on Udacity's Senior Web Developer Nanodgree and something clicked! They packaged up the motivation that I needed: a clear flow of tasks and interesting projects to build using technologies that I want to learn. Not sure if there's much motivation for me behind the actual nanodegree, but it's a perk. The final selling point was that it's a bit pricey and there's a reward for finishing early. Spending the money will be an extra kick in the ass to make progress. 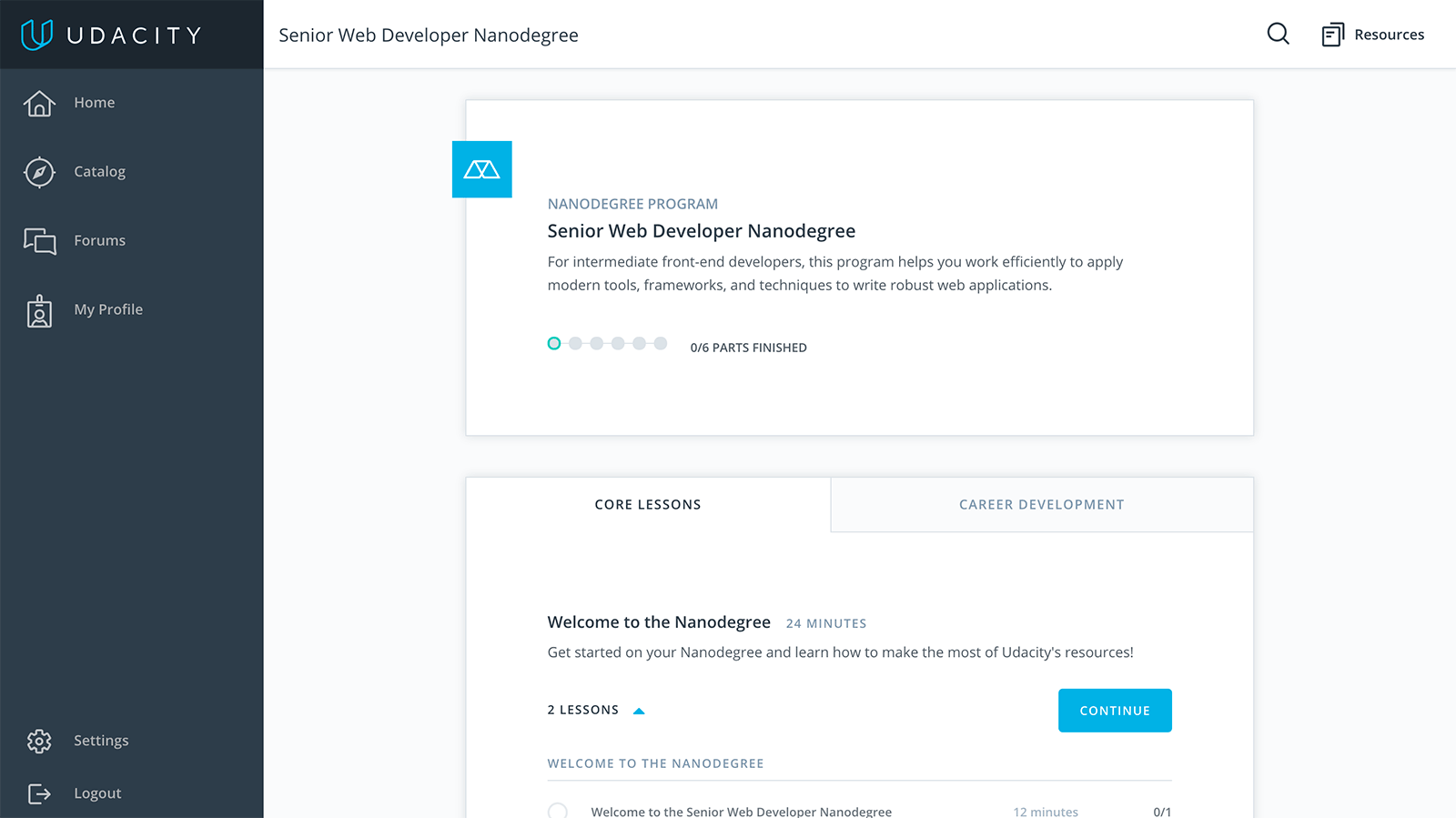 w I'm also extremely interested in the teaching format itself. I'm a lifelong learner and I love sharing/teaching. So on top of learning, I'm learning about learning (yo dawg). I've been active in meetups, conferences and workshops and I work for Code School and (really) Pluralsight. The first few years of the explosion of online learning sites have been pretty freeform. We're starting to see multiple approaches into guided learning paths. I get to see a few firsthand, peeked at Treehouse's, and am now giving Udacity's a whirl.

So, I'll be sharing my experience as I go. This will be a series of posts as I take on each section. I'll be sharing what I'm learning as well as my take on the nanodegree program itself.

The onboarding flow was really well done. The folks at Focus Lab recently overhauled Udacity and they did an awesome job. The intro video was very human and there were a series of videos and modals explaining the benefits of the process as well as what you'll be learning. 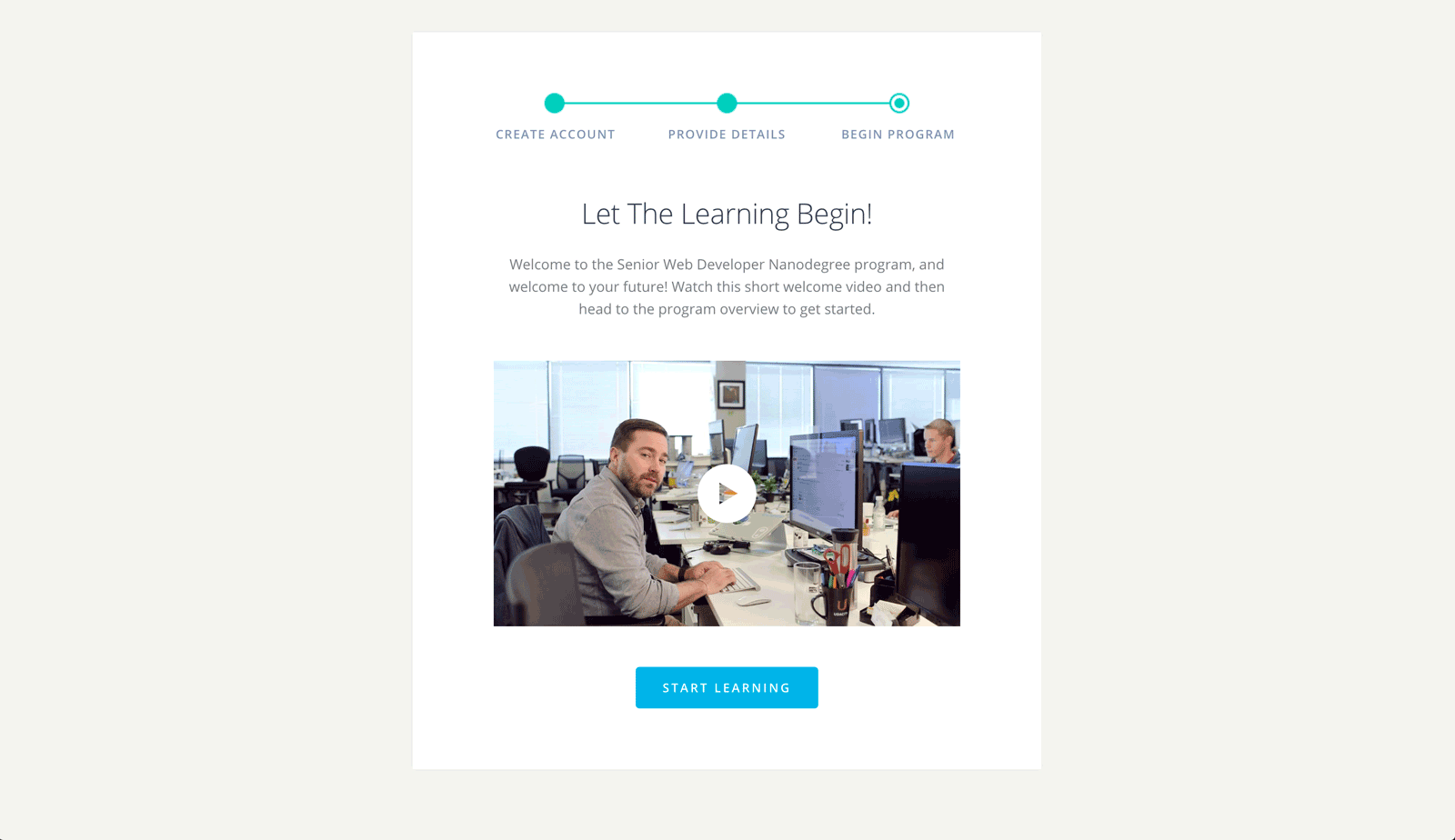 I took some quick notes along the way:

My take at the end of the introductory session: I’m loving this, the videos are well done and lead off with a critical thinking exercise. That solidified things for me because it means they're walking the walk. I'm all in.

The goal of this will be to create a small app that allows somoene to create an event, using some cool tech. This was super interesting to me since I do so many events and because I can see how the functionality can be used in many other ways. Since it's form-based, you start off learning about best practices for building forms. Cameron Pittman and Ido Green lead the way, with visits from the guy who literally wrote the book on forms, Luke Wroblewski. 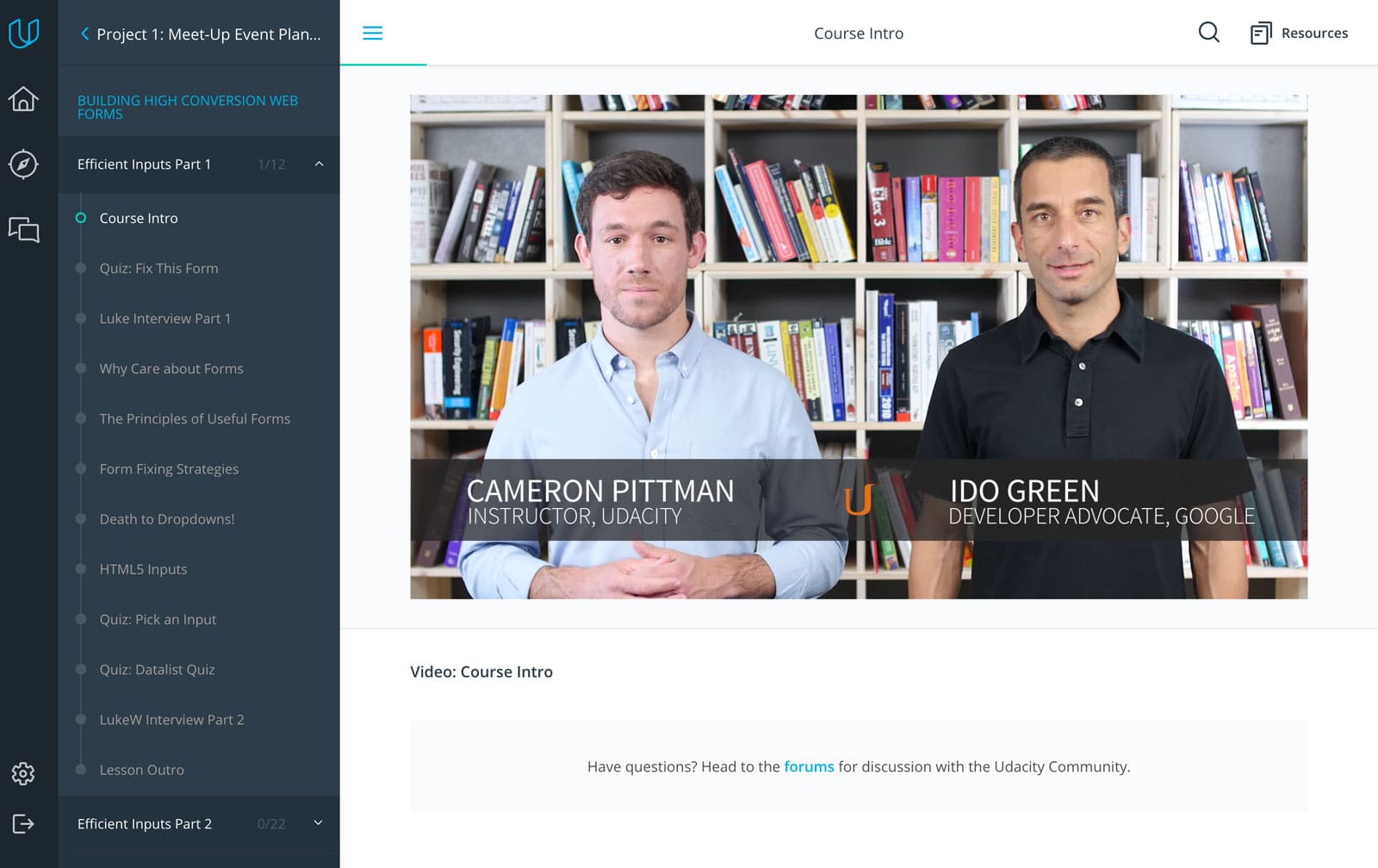 The challenges are integrated well within the video space: you watch a bit, then answer a question or do a little bit of code in that same space. I was pretty used to this and it works well, but they took it to another level. The initial project is doing form validation with setCustomValidity and they built a Chrome extension that runs tests on your code. Here's my first run:

Again, I took some notes along the way:

Things I need to learn from the solution code:

That's it for the first section. I'm hooked now and this felt so good: